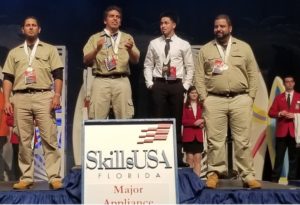 Three students from Miami Lakes Educational Center and Technical College attended the SkillsUSA Florida State Skills and Leadership Conference in Pensacola, Florida, April 8-10, 2019, and competed in the Major Appliance and Refrigeration Technology Contest. The competition consisted of 10 different stations; the students had 30 minutes per station to diagnose and correctly identify the fault of appliances, such as washers, dryers, stoves, refrigerators and microwaves. There was a written job interview portion of the contest as well. The criteria were correct diagnosis, communication skills with the judge, safety, and the ability to use tools correctly. The judges were technical trainers and service managers from various companies including Dacor, Bosch, Frigidaire, and Sub Zero.

We are proud to announce that Pedro Duran and Julian Noa both received a medal in the competition. Pedro placed second and Julian placed third with only a 1.5 point difference in their places. Pedro is currently preparing for the SkillsUSA National Conference which will be held in Louisville, Kentucky, June 23, 2019 – June 29,2019.